What age range are hoverboards suitable for? limits and requirements

5 Practical and Exciting Uses for Hoverboards

5 Practical and Exciting Uses for Hoverboards

Are Hoverboards Waterproof? The Truth About Water Resistance!

Are Hoverboards Waterproof? The Truth About Water Resistance!

According to the majority of manufacturers, the hoverboard minimum age recommendation for riding hoverboards starts at eight years old, while a handful of others aren’t recommending hoverboards to be ridden by kids under the age of 5.

Is there an age limit for riding hoverboards? How old should you be?

It could also be a bit challenging for them to maneuver a hoverboard in a congested area. But, that being said, its also important to note that seniors might really need a hoverboard for traversing places with optimum efficiency. In fact, hoverboards can really be a big help for them for walking around and even conveniently accessing their homes.

Is there an actual age law related to hoverboards?

As often happens with any personal transportation devices, there are always going to be some cities, states, countries, airlines, airports, malls, and universities that make and enforce laws and rules aimed specifically at restricting or even banning hoverboards.

Obviously, they've never ridden one or they would perhaps be less stringent about the laws they enforce to stop the rest of us avid riders from riding. As one of them, I've found that you just need to get used to riding and use good old common sense. That's it!


Now, there is no federal law in the US as far as hoverboards go. however, specific states and cities might restrict the rider’s age more than just to only starting at eight years old.

There was a bill passed in 2016 in California requiring anyone to be 16 years old or over for riding a hoverboard. And, besides the hoverboard age law, California requires appropriate head protection as well as enforcement of state speed limit rules.

In Orange County, CA, the law says that hoverboard riders are only allowed to ride on those streets with a speed limit below 35 mph. In addition, any rider caught violating the hoverboard laws or riding under the influence will end up paying a $250 fine. The city of Los Angeles does not allow hoverboards on public trains.

New York City's hoverboard laws ban them from any/all public areas. However, since they're actually classified as motor vehicles, several groups are fighting to get the law overturned. In the meantime, the cops can fine you for each/every offense and it could run in the hundreds of dollars.

The good news for all of you hoverboard enthusiasts

Despite the laws and even some outright bans that are in place, hoverboards are still allowed in most areas.

Even where there are laws that restrict hoverboards, they're really not being actively enforced.

In the UK for example, hoverboards are considered to be motor vehicles, however, by the same token, they don't meet the registration requirements so they're not legal for riding in public and can only be ridden on private property.

This dates all the way back to the 1835 Highway Act, which at the time, applied to horse-drawn carts and footpaths. So, the law is obviously being stretched far beyond the logic of its intended purpose since hoverboards bear no similarity to horse-drawn carts or even to automobiles.

Whether you're located in the US or the UK, it's important to bear in mind that sometimes police might use misapplied or even non-existent laws for the purpose of forcing you off your hoverboard. So, since nobody can predict if and when that might occur in your own local area, your best bet is to just use your own common sense when making a decision as to whether or not riding where you live is advisable.

Hoverboards actually started out as fictional levitating personal transportation boards.
They were initially described in 1967 by author M. K. Joseph and later popularized by the "Back to the Future" films. In the 1990s, hoverboard rumors were fueled by the well-known film director Robert Zemeckis and it was thought that hoverboards were actually a real thing, but weren't being marketed because parents' groups thought that they were too dangerous.

Those rumors were, of course, conclusively debunked.

How safe are hoverboards?

Is there a recommended hoverboard type for each age group?

Don't forget about the hoverboard size when choosing one for a young kid. Bear in mind that hoverboards that are built for adults have a tendency to be a great deal bulkier in size compared to a hoverboard designed for a young child.

On the other hand, you should also take into consideration the fact that your kid will also be growing, so don't get one that's too small either.

Our Hoverboards Top Picks for Young Kids for 2021 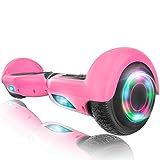 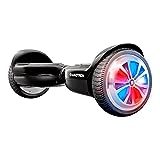 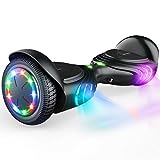 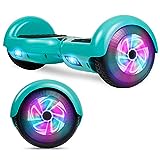 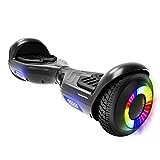 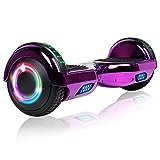 Self-balancing electric hoverboards are also a good option for their durability and ease-of-learning capabilities. Hoverboards with rubber tires are another important factor to take into consideration.

For kids, choosing a type of hoverboard complete with tires that won't wear out quickly while also offering a smooth easy ride for a child is very important. And, rubber tires las much longer than plastic tires, rubber tires. So, when you're looking for the best choice in hoverboards for kids, always look for those with rubber tires that are larger than those on adult hoverboards.

Our Hoverboards Top Picks for older Kids for 2021 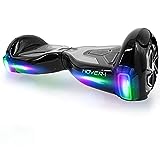 Music-Rhythmed hoverboards are great fun for teens with their stable ride and good self-balancing as well as their Bluetooth sync capability and LED lights.

Our Hoverboards Top Picks for Teens for 2021 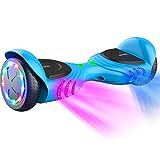 Smart self-balancing transporters are the perfect choice for adult hoverboard enthusiasts. They also offer better stability since you steer with your knees in addition to your feet.

Our Hoverboards Top Picks for Adults for 2021 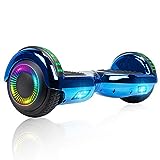 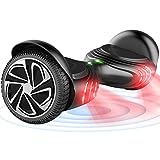 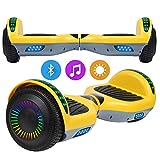 It's obvious that hoverboards are here to stay for riders from kids to adults.

You’ve probably heard by now that they are the hottest gift for the holiday season on top of recently starring in numerous viral videos.

In fact, even celebs are getting in on the act and riding their own hoverboards, including Mike Tyson, Justin Bieber, Wiz Khalifa, Jamie Foxx, Skrillex, Chris Brown, Usain Bolt, and more.

As hoverboards gain in popularity and changes and improvements come about, we'll be keeping you updated and informed about them. We certainly hope the info in this hoverboard guide will be helpful to you. In the event that you know of recent changes in US or UK laws related to riding hoverboards, please contact us and let us know about them. We love hearing from you!

Jason Leeman is an engineer, tech geek and personal electric vehicle enthusiast. He loves testing the latest in urban personal transportation and sharing his love of wheels with his kids and his blog readers.